Inside 09. Sam's Desk and Chair in Den 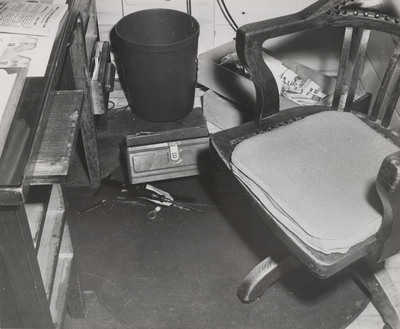 Sam's desk and chair; drawers on den/study floor from right side of desk; metal file box containing miscellaneous personal papers. In his criminal investigative analysis requested by the Cuyahoga County Prosecutor's office for the 2000 trial, retired FBI agent Gregg McCrary said "The crime scene photographs and initial police reports indicate that the killer made a feeble attempt to make the crime scene appear to be a "for profit" burglary, possibly with a drug-related motive... Burglars rarely take the time to stack some drawers, selectively dump the contents of other drawers, or search a wallet at a crime scene as was done at this scene. The reason is that it is too high risk an environment, especially when the crime scene is a murder scene. The same is true for the alleged search of Dr. Sheppard's medical bag. It is unlikely that after committing a homicide and being interrupted by the husband of the victim that a homicidally crazed drug-addict would either take the time or have the ability to selectively identify morphine ampules and Demerol among the contents of a medical bag."