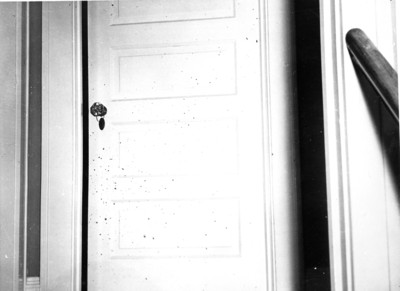 View of door leading from upstairs hall into murder room; blood spatter visible on door. The blood spatter throughout the room shows the savagery of the attack on Marilyn. The severity of the beating caused many expert witnesses and others involved with the trials to doubt burglary was part of this crime. F. Lee Bailey, Sam's attorney at the 1966 trial, also believed this brutal murder wasn't likely committed by a burglar (he suggested the murderers were Mayor Spencer Houk and his wife, Esther Houk). In a letter to the Bay Village Police Department dated November 23, 1966 Bailey said, "The dishevelment of the house appears to be more a cover than a quest for valuables... No burglar would hit a woman 25-35 times. He would run away."