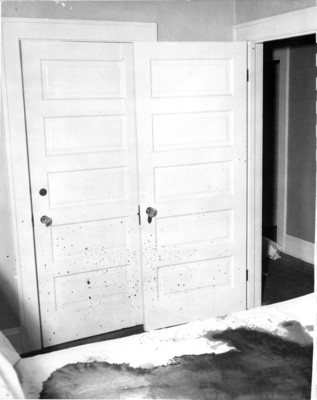 East wall of murder room. Both the door opening into the bedroom from the hallway and closet door are covered with blood. Dr. Paul Kirk, expert witness on Sam's defense team, believed that the two larger stains on the closet door were too large to be impact spatter. In his 1955 Affidavit, Kirk stated that "One very large blood spot [about 1 inch in diameter] was present on the wardrobe door... This spot could not have come from impact spatter. It is highly improbable that it could have been thrown off a weapon, since so much blood would not have adhered during the back swing for so long a distance, and then separated suddenly at just the right moment to deposit as it did. This spot requires an explanation different from the majority of the spots on the doors. It almost certainly came from a bleeding hand, and most probably occurred at a time different from the time that hand was wielding a weapon. The bleeding hand could only have belonged to the attacker." Dr. Kirk reported that the blood was type O, which was Marilyn's blood type. Both Sam and Richard Eberling were type A.