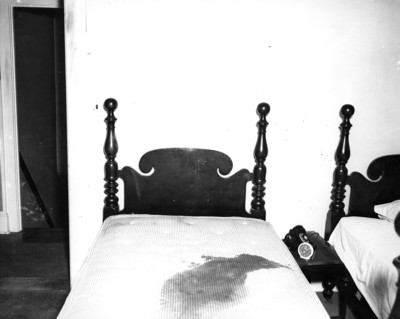 Marilyn's bed after her body and the bed clothes were removed. Hallway is visible at left of photo; nightstand with phone and alarm clock are to the right of the bed. In their 2003 book, Dr. Sam Sheppard on Trial, Jack P. DeSario and Bill Mason write that when the 2000 prosecutorial team met with Fred Drenkhan, the first officer on the crime scene, he mentioned that Paul Gerhardt, a Bay Village handyman and volunteer patrolman who guarded the Sheppard home after the murder, told him that something was missing from the murder room. Gerhardt said he repaired a cord on a lamp for the Sheppards and, on July 2, at Marilyn's request, put the lamp back in their guest room--the murder room. The lamp is not on the nightstand in the crime scene photos (Desario, p. 69).