Other Evidence 10. Sam in Neck Brace at Bay View Hospital 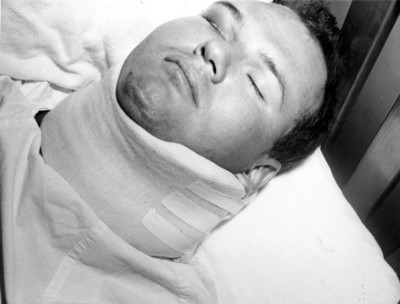 Sam was taken to Bay View Hospital (the hospital owned by his family) on the day of Marilyn's murder. His injuries were very controversial. Sam said he was knocked unconscious twice by the person who murdered Marilyn. Dr. Gervase C. Flick, Bay View Hospital physician, examined the x-rays taken of Sam after the murder. Flick testified in the 1954 trial that he saw a chip fracture on Sam's C-2 vertebra on the X-rays he saw on July 4. He ordered another set of x-rays on July 7 but could no longer see the fracture. Read Flick's full 1954 trial testimony here.