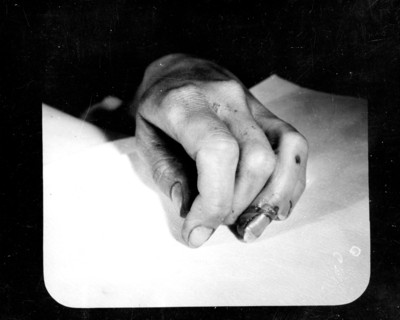 In his 1954 trial testimony, assistant coroner Lester Adelson described Marilyn's left hand: "'There is almost a complete separation of the fingernail of the fourth left ring finger with the root of the nail exposed... there is a small bridge of skin which still holds the nail in place. That is called technically an evulsed wound or a wound where something had been torn away from its underlying attachments." In the 2000 trial, Terry Gilbert, attorney for the Sheppard Estate, referred to the booking records of Richard Eberling, Gilbert's favored suspect for Marilyn's murder, stating that the half-inch scar on Eberling's wrist could have come from Marilyn trying to defend herself against him. However, Cuyahoga County Coroner Elizabeth Balraj said that she felt the injury to Marilyn's left right finger was more consistent with blunt force trauma (from Dr. Sam Sheppard on Trial by Jack P. DeSario and Bill Mason, 2003, p. 156-157).