Inside 14. Carpet Spots in Northeast Corner of Living Room 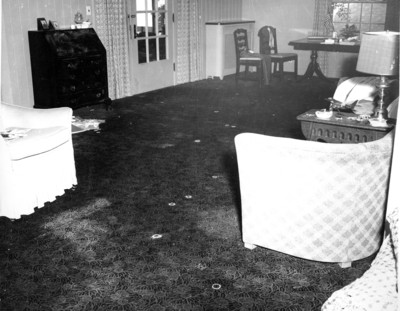 In the 2000 trial, retired Police Detective Henry Dombrowski testified about his visits to the Sheppard home on July 23, 26, 27 and August 2 and 5, 1954 (from Dr. Sam Sheppard on Trial by Jack P. DeSario and Bill Mason, 2003, pp. 120-122). Dombrowski spoke about the search for blood spots throughout the Sheppard home. He said that many of the spots were not visible to the unaided eye but did show under luminol spray and portable spotlight. He noted that any spot created by a substance with iron in it, including cola or tea, would show up under the spotlight. In his 1955 Affidavit, Dr. Paul Leeland Kirk, professor of criminalistics and forensic expert for the Sheppard defense team, stated that the spots were a blood trail left by the Marilyn's killer. These photos detail some of the experiments Kirk performed to help him interpret the blood evidence.