The Witt mansion is the newer of the two dwellings. Its Greek Revival styling with its massive front portico and fluted Ionic columns reflects the prominence of its wealthy owner. The Anson Smith mansion readily identified by its Neo Classic detail and characterized by its triangular-shaped Doric front portico represented the height of fashion when erected in 1841. A later owner Colonel William Harris in 1877 hired a popular Cleveland architect named Joseph Ireland to refurbish his aging dwelling. Harris’ renovated Eastlake style mansion resembled other fashionable residences further down the boulevard. Both mansions were demolished for the new Statler Hotel in 1910. 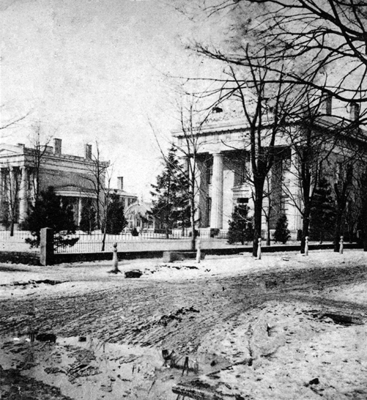