Home > Michael Schwartz Library > MSL_EVENTS > Adoption’s Hidden History: Featuring the Cleveland Debut of the Documentary Film by Ann Fessler A Girl Like Her 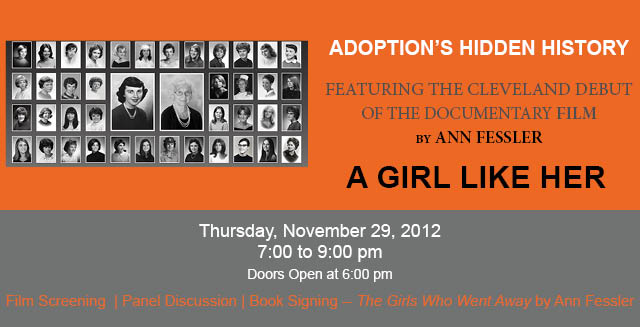 Cleveland State University Michael Schwartz Library in partnership with the Adoption Network Cleveland presents “Adoption’s Hidden History,” featuring the Cleveland debut of Ann Fessler’s documentary film, A GIRL LIKE HER, about women who surrendered their children to adoption in the 1950s and 1960s. Hear what they have to say about their experiences and the long-term impact on their lives. This free and open to the public program will be held on Thursday, November 29, 2012 from 7:00 to 9:00 pm in the CSU Main Classroom Auditorium, located at 1899 East 22nd Street. Doors open at 6:00 p.m. Free Registration

A panel discussion, including Ann Fessler; Dennis Goulden, Executive Producer of the Montage Film Collection; adoptee Betsie Norris, Founder of the Adoption Network Cleveland; Valerie Treisch-Chirdon Field Education Director in CSU's School of Social Work; and two birthmothers, will follow the showing of A GIRL LIKE HER and will be moderated by Evan Lieberman, Associate Professor, CSU School of Communication. The program concludes with a book signing of the nationally acclaimed book, The Girls Who Went Away, by Ann Fessler (available for purchase before and after the program).

Preceding “Adoption’s Hidden History” are 3 events to introduce Ann Fessler to the Cleveland community and to celebrate her work:

“I’m extremely excited to bring my film A GIRL LIKE HER to Cleveland where multiple connections exist between my film and the community,” said Ann Fessler. “I will have the opportunity to re-connect with the wonderful people at Adoption Network Cleveland. I will also have a chance to meet and personally thank several people from Cleveland who were of great assistance in locating and securing archival film footage necessary to the making of the film, including Glenda Thornton, Director of the Cleveland State University Michael Schwartz Library and Bill Barrow, Special Collections Librarian. I will also have an opportunity to personally thank documentary filmmaker Dennis Goulden, who donated films he produced for the WKYZ Montage program to the library, and then generously allowed me to use footage from one of his films in my production."

About Montage Film Collection
Parts of "A Girl Like Her" include some footage from WKYC’s award winning “Montage” series, which was produced from 1965 to 1979 by a special public affairs unit of WKYC-TV. This dramatic and professional film series focused on Cleveland and Cuyahoga County, emphasizing local history, personalities, and the contribution of Northeastern Ohio to the world. In 1980 the Montage series, consisting of more than 250 documentary films, was donated to Cleveland State University by NBC and Dennis Goulden, the Executive Producer. Fifty-three of those programs, formerly only available on 16-mm film and 3/4-inch videotape, have been digitized through the efforts of CSU's Michael Schwartz Library, and made available to a global audience. One of those powerful films, “I’ll Never Get Her Back,” about a woman who enters a maternity home in Cleveland to surrender her child for adoption will be shown from 6:00 to 7:00 p.m. and again after the program. Fessler has referred to it as the only empathetic film about surrender from the time period that she has found in her years of archival footage research. About Adoption Network Cleveland
Adoption Network Cleveland, a non-profit organization, provides support, education and advocacy for adoptees, birthparents, adoptive parents, prospective adoptive parents, foster youth and parents, foster care alumni and professionals. Founded in 1988, Adoption Network Cleveland recognizes adoption as a complex, lifelong and intergenerational journey for all those whose lives are touched by it. www.AdoptionNetwork.org. Adoption Network Cleveland is a member of Greater Cleveland Community Shares.

About the Moderator & Panelists

CSU’s School of Social Work’s provider status is approved by the Ohio Counselor, Social Worker and Marriage & Family Therapist Board.