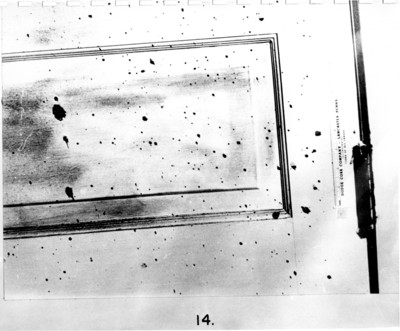 These drops, with low velocity and mixed pattern of impact (predominantly horizontal), could not have originated in the same manner as the remainder of the blood in the room and gives the clue to the entire pattern of the event. Extensive experiments show that probably nearly all of the blood drops on the east wall were thrown there by the back-swing of the weapon used, since this is the only method by which low-velocity drops could have reached that wall, and it is the only way in which they would have been predominantly at right angles in impact direction.