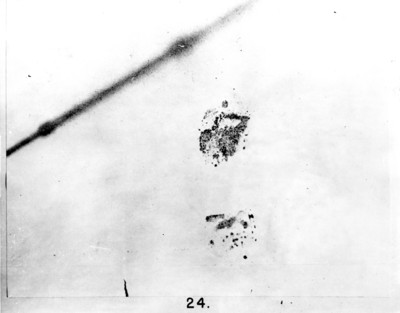 Tests of the distance through which blood can be carried on bottom of shoes was performed by stepping repeatedly in a region of heavy blood spots on a floor until the shoe soles were thoroughly blood-smeared. The subject then walked normally along a strip of wrapping paper until no more visible blood could be seen on the paper. The last footprint showing any visible trace of blood occurred 50 feet from the origin. Photograph No. 24 shows the first shoe print. Minute amounts of blood detectable chemically may naturally be carried further than the last visible print. The important aspect of this experiment is that the bloody footprint is not a series of drops or spots as claimed in the Sheppard house, but rather a diffuse area of thin deposit, retaining a semblance of the shape of the shoes' contact with the surface. It must also be remembered that the murderer may have stepped in very little blood as compared with the rather large amount used in this experiment.