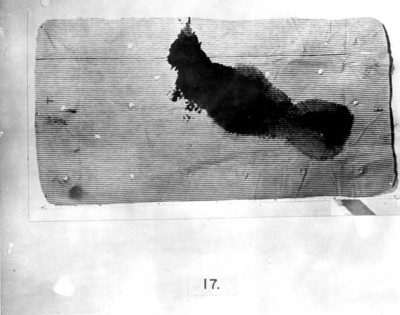 Examination of the mattress top as well as superficial examination of the under sheet and pad on which the victim was murdered shows certain interesting and possibly pertinent facts. Examination of the bedding shows the presence in considerable quantity of a fluid other than blood, most heavily concentrated in the lower portion of the bedding, and forming a large part of the large central bloody area. This fluid was urine, probably voided at or shortly before death. It was probably hypotonic, i.e. less concentrated than the blood, for it appears to have produced hemolysis of the blood corpuscles as it mixed with the blood. On the east side of the bed, visible on the lower sheet, corresponding to the edge of the mattress and just south of the center point of the sheet, is a region that appears bloody, but with very dilute blood. This spot is 9 inches wide at its widest point, the south edge being 3 ft. 3 inches from the south edge of the sheet and the north edge 3 ft. 9 inches from the north edge of the sheet. Examination of this spot visually and with magnification (in the prosecutor's office) showed the blood to be highly dilute and almost certainly hemolyzed. This could happen by mixing the blood with any dilute water solution or water itself, as well as with urine. Its position, shape, and size are most consistent with it having been made by a wet knee placed against the sheet. Inspection of the spot shows that blood was carried laterally with the flow of fluid. Original blood spots are still present, only partially displaced by the diluting fluid. A further observation of the blood pattern on the sheet is significant, which consists of an area approximately 12-18 inches to the right of the wet spot discussed above and 18 inches from the edge of the sheet to the center of the area. This area contained numerous original, undiluted blood spots that had been strongly smeared in the north-south direction, lengthwise on the bed. The area involved was at the exact spot that the attacker must have occupied to intercept the blood spots on the walls as they were intercepted; it lies just where a knee would have been placed to balance him during the wielding of the weapon.