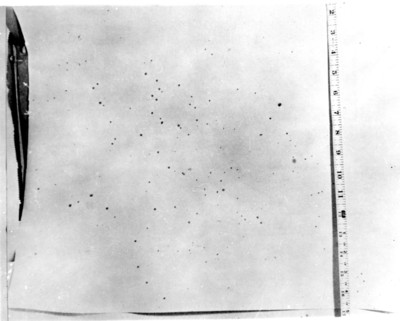 The other significant regularity that must remain undisputed is that large spots 1/4" or more will only be obtained at any distance over very few feet by throw-off from the weapon. To test this, various objects were dipped in blood and the blood was thrown from them in various ways. The spots were predominantly small and high velocity in front of an object thrown forward violently as in delivering a blow, as was true of many spots on Sam Sheppard's bed. They often could not be distinguished from the small spatter spots, which also tended to move in the same direction. A typical range of sizes is shown with forward throw-off from the light bent bar, including large spots as expected with this motion if delivered with the violence of a true blow.