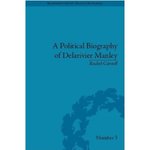 A Political Biography of Delarivier Manley

This is the first full-length biography of Delarivier Manley(c.1670-1724). A Tory pamphleteer, playwright, and satirical historian, Manley was regarded by her contemporaries Jonathan Swift and Robert Harley as a key member of the Tory propaganda team. Her best-selling political scandal chronicle The New Atlantis(1709) helped to bring down the Whig ministry in 1710. Her reputation was tarnished, however, in subsequent generations and twentieth-century scholars often misread her works as under-developed novels rather than as complex works of political satire. Carnell argues that Manley's quasi-autobiographical writings Letters Writen [sic] by Mrs. Manley (1696) and The Adventures of Rivella (1714)are coyly political self-portraits which must be read in their historical context. This is the first book to take account of all known information about Manley's life and work. It corrects many oft-repeated errors in extant scholarship, and uncovers previously unknown details about her life, including evidence about three illegitimate children by John Tilly, Governor of Fleet Prison. Carnell explores the delicate verbal negotiations required for a woman to enter the partisan hotbed of the early eighteenth-century political debate, thus offering an important historical perspective on women's continuing efforts today to be taken seriously in the political public sphere.