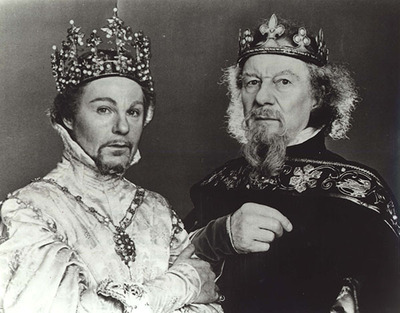 Crowned heads: Two members of British theatre's royalty," Derek Jacobi and Sir John Gielgud, portray Richard II and his uncle, John of Gaunt" (Cleveland (Ohio) Press caption). Richard does not want to take advice from his uncle. On his deathbed, John of Gaunt expresses his concern for the realm in one of the most patriotic speeches in English literature.

John of Gaunt: "This royal throne of kings, this sceptered isle,
This earth of majesty, this seat of Mars,
This other Eden, demi-Paradise,...
This blessed plot, this earth, this realm, this England..." (II.i.40-50).

A co-production of BBC-TV and Time-Life Television, presented for the Public Broadcasting Service by WNET/Thirteen, New York, N. Y.