Inside 10. Close-up of Marilyn's Watch on Den Floor 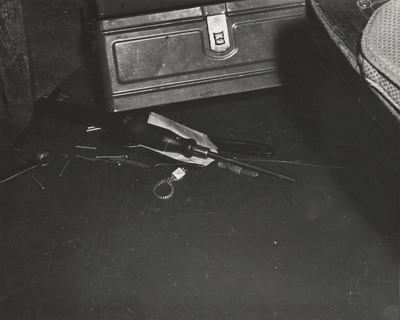 Close-up of den/study floor by Sam's desk showing a woman's wrist watch. Cleveland Detective Robert Schottke testified in the 1954 trial that "To the rear of the desk in the den was a green metal box which was tipped on its side. In front of this box was several tools. There appeared to be a plug wrench, hammer, some type of pins, and among these tools was a yellow gold lady's wrist watch." He reported that they later learned this was Marilyn's watch. Coroner Gerber testified in 1954 that her watch was covered in blood.