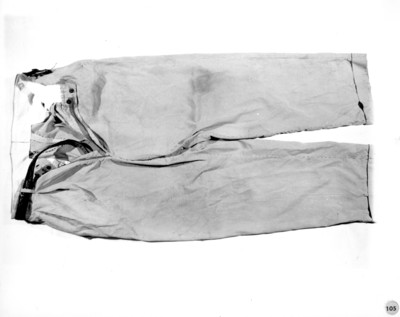 Trousers Sam was wearing when police arrived at his home the morning of July 4, 1954. In the 1954 trial, Coroner Samuel Gerber testified that he received shoes, socks, trousers, undershorts and a billfold collected from Sam while he was at Bay View Hospital (Sam couldn't remember what happened to his t-shirt). The items Gerber received were damp. Tests on the trousers revealed only a slight smear of O type blood on the left pant leg (Marilyn was type O). The absence of blood on Sam's trousers was a controversial issue in all of the Sheppard trials. The Sheppard team felt it proved that Sam didn't murder Marilyn. The State felt that the lack of blood on the trousers only proved the trousers weren't in the room during the murder and/or Sam never wrestled with Marilyn's murderer because the murderer would have been covered with Marilyn's blood.