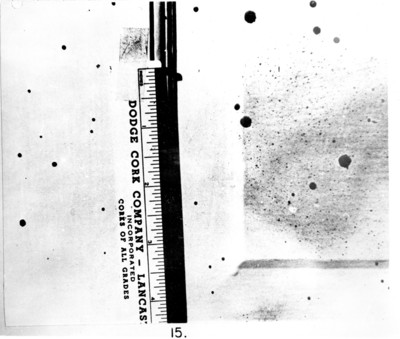 Extensive experiments show that probably nearly all of the blood drops on the east wall were thrown there by the back-swing of the weapon used, since this is the only method by which low-velocity drops could have reached that wall and been predominantly at right angles in impact direction. It can be stated very positively that they did not originate as impact spatter, which is the source of most of the drops that impacted other parts of the room. The low and triangular distribution of the drops on the two doors corresponds with the swing of the weapon, which started low in left-hand swing, rising through an arc, and striking the victim with a sidewise angular blow rather than one brought down vertically. The absence of blood on the ceiling at the time when blood was thrown in other directions from the weapon demonstrates that no vertical "chopping" blows were used. A swing similar to that used with a baseball bat by a left-handed batter is the only one consistent with the blood spot distribution.