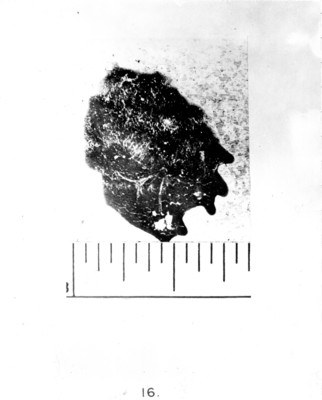 One very large blood spot was present on the wardrobe door (photographs 14, 16). It measured about 1" in diameter at its largest dimension. It was essentially round, showed no beading, and had impinged almost exactly perpendicular to the door, i.e. horizontally and at right angles to the door. This spot could not have come from impact spatter. It is highly improbable that it could have been thrown off a weapon, since so much blood would not have adhered during the back swing for so long a distance and then separated suddenly at just the right moment to deposit as it did. This spot requires an explanation different from the majority of the spots on the doors. It almost certainly came from a bleeding hand, and most probably occurred at a time different from the time that hand was wielding a weapon. The bleeding hand could only have belonged to the attacker. The origin of the injury is dealt with elsewhere, as is supplementary confirmation of the different origin of this spot. It should be noted that this spot is probably not unique in origin, and other spots on the east wall and possibly elsewhere may have had the same origin, but this spot was unique in size and appearance and was consequently selected for more extensive study.