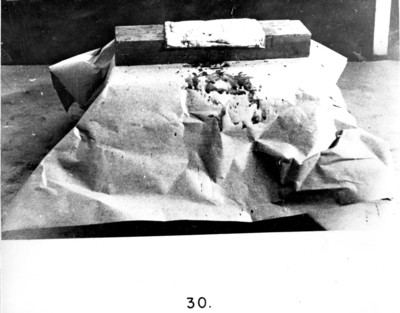 In order to determine the nature and appearance of blood spots resulting from spatter under different conditions (from throw-off by objects simulating weapons and similar questions), a considerable series of experiments were conducted. A wooden block was taken as approximating the hardness of a skull. Over it was placed a layer of sponge rubber 1/8" thick, which approximates the thickness of the subcutaneous layer of the forehead and scalp. Over this was placed a sheet of polyethylene plastic to simulate the skin, which is impermeable to liquids. The arrangement was placed on a stool on wrapping paper to collect blood spatter.