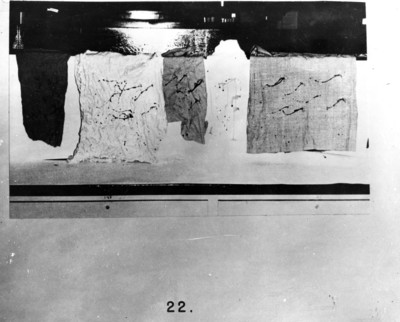 The condition of the cloths and the three or four drops that fell after the first rapid drainage are illustrated. The three or four drops fell within 2 1/2 minutes, after which no further drainage occurred and the remaining blood dried on the clothing. Shaking of a cloth after application of liberal amounts of blood caused the removal of nearly all of the excess immediately. Thus, whether clothing is shaken by the movement of its wearer or allowed to stand completely quiet, no blood drains after a short interval of time; that which is retained is either absorbed by the cloth (predominate) or dries in a crust on the surface.