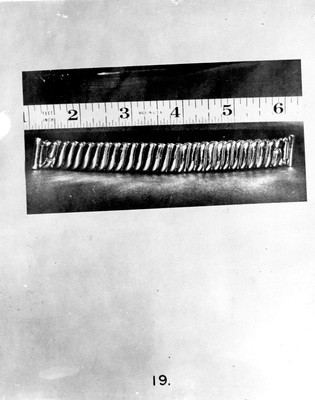 Fresh blood on a smooth non-absorptive surface dissolves and washes away rapidly in water. In order to determine how long blood would remain on an expansible metal watch band under these conditions, such a band was daubed liberally with freshly shed blood in two separate experiments. In the first instance the blood was allowed to remain 20 minutes after deposition and the band was then dipped in fresh water and moved slowly back and forth. In the second, the blood was allowed to dry for it hours and treated similarly. In both instances, the blood dissolved rapidly and was essentially gone in less than 1 minute. In the latter experiment, a bit of clot in a recess in the band persisted for about 3 minutes but was washed colorless in less than 2 minutes. In no case could the blood have been grouped after 1 minute in the water, and less than half a minute removed approximately 90% of it. This experiment emphasizes the great importance of the type of surface on which blood is deposited because it is very difficult to remove blood completely from absorptive surfaces. It also is conditioned by the fact that the amount of blood necessary for grouping is far in excess of that necessary for detection, and greater than is required for precipitin tests.