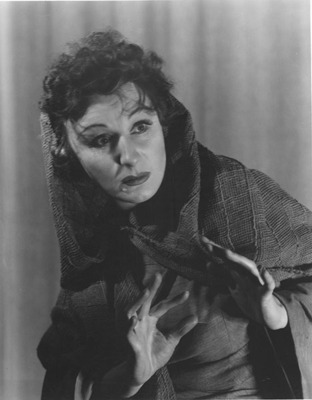 Judith Anderson as the famous sleep-walking Queen... Lady Macbeth is tortured by memories of the murders. A doctor has been called who observes her walking in her sleep (Act V, scene 1)..

Doctor: "Not so sick, my lord,
As she is troubled with thick-coming fancies
That keep her from her rest."
Malcolm: "His fiendlike Queen,
Who, as 'tis thought, by self and violent hands
Took off her life..." (V.viii.69-71)