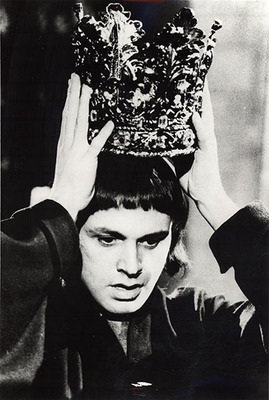 Moment of Truth: David Gwillim, as the wayward Prince Hal, places on his own head the crown which will make him the King of England...in this dark and often bitterly funny chronicle play, rarely performed in America.

My due from thee is this imperial crown,
Which, as immediate from thy place and blood,
Derives itself to me. Lo, here it sits,
Which God shall guard. And put the world's whole strength
Into one giant arm, it shall not force
This lineal honor from me. This from thee
Will I to mine leave, as 'tis left to me. (IV.v.41-47).

A co-production of BBC-TV and Time-Life Television, presented for the Public Broadcasting Service by WNET/Thirteen, New York.