The Curious Case of Colors 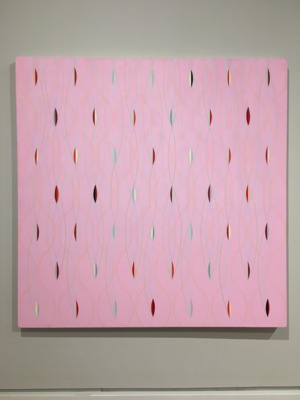 I seek to reveal moments when invisible phenomena make themselves visible. Each painting, drawing, or book builds on my previous work, addressing questions of sensitization or de-sensitization in visual form.

For at least the last five years, the drawings, paintings and books have been an exploration of what I call vibrational vulnerability: the invisible phenomena of incremental cause and effect. The works arise from meditative contemplation of seemingly disparate phenomena, which we have compartmentalized, and yet which function as tandem, parallel realizations of that ever-changing continuum we call Life: a cosmic dance of consequence. I seek to evoke and convey the ways in which our psyches are linked to the laws which manifest themselves in the formation of a flower, a snowflake or a seashell. The work strives to access this archetypal intellect.

Although much of the work has come to reside in the abstract, occasionally the ghost of a female figure recurs, as symbol and metaphor, for me, representative of the violation of universal soul or the brutalization of Mother Earth. Even in my earlier work, which was more figuratively representative, the figures were encased within geometric constructs; not as purely mathematical or decorative effect but as embracingly and evocatively symbolic.

My thinking has for many years been informed by what I refer to as the law of limits: that invisible phenomenon of tension and attraction which maintains the cosmic order. Harmony/Disharmony. Sensitization/Desensitization. Excess/Sustainability. Although these philosophical considerations play in the back of the mind, the work is arrived at through purely intuitive release, just as a ballet dancer soars beyond the discipline of training.

Maeterlink wrote, “Out of the silence of the soul is born the Wisdom.” My working process attempts to arrive at this distillation of energies: reverberations, responses, echoes–the vibrational criteria of effects. How is energy transmitted? Sensitive chaos, formulating itself into waves, patterns and natures intermeshing. Parallel phenomena: body, spirit. This is the space of my work.

Audra Skuodas is a visual artist whose studio is located in a converted warehouse in Oberlin, Ohio, home of Oberlin College and the Oberlin Conservatory of Music. Skuodas was born in Lithuania in 1940 and lived for six years in a displaced persons camp in Germany before coming to the U.S. in 1949. She became a U,S, citizen in 1961 and earned a B.A. and M.A. at Northern Illinois University. She married the artist John Pearson in 1965 and they have two children. She has taught at the Nova Scotia College of Art and Design, the Cleveland Institute of Art and Oberlin College. For the past five decades Skuodas has been focused and prolific, producing thousands of paintings, drawings and artist’s books which are at the same time personal as well as universal, exploring the boundaries between internal and external realities. Donald Kuspit has written of her work, “Whatever suffering the figure may signify, it does so largely through the tense way it interacts with the rest of the picture , which is essentially geometrical.” Skuodas is a true humanist, her work being concerned with the role of Humanity in the universe: its evolution/devolution and sensitization/desensitization. This often uncomfortable interaction is a significant concept and the point of reference in her work: in the canvases and drawings, and especially in the books. The books evoke the Japanese Zen Buddhist idea of satori: a symbiosis of image and text; the special moment of awareness in which the infinite and the finite become one. Satori is central to Skuodas’s work and is the key concept that, as an artist, she offers back to the world. In the past decade, Skuodas has had two one person shows in New York, was reviewed in Art in America, and in 2010 received the Cleveland Arts Prize Lifetime Achievement Award In the Arts. She continues to work compulsively in her studio.