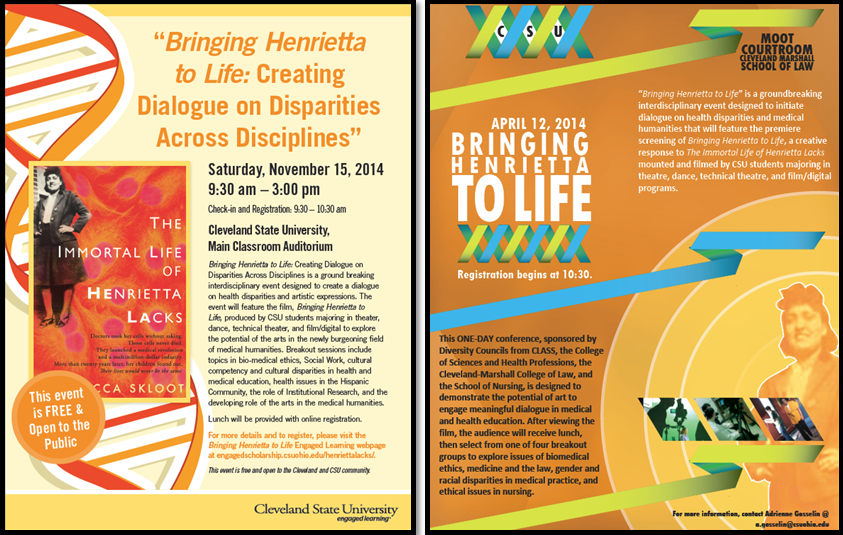 Bringing Henrietta to Life: The Arts in Medical Humanities

"Bringing Henrietta to Life" began in 2011 as a creative response to The Immortal Life of Henrietta Lacks, the New York Times best seller by Rebecca Skloot that traces the history of HeLa cells, whose discovery revolutionized medical research, and Henrietta Lacks, the young African American woman from whom the cells were extracted. Since then the original theatrical performance evolved into a film which evolved into a vehicle to explore the role of art in undergraduate medical education.

The first conference, "Bringing Henrietta to Life: The Arts in Medical Humanities” was designed to engage dialogue on diversity and disparities and held on April 12, 2014. Co-sponsors were the Deans Diversity Councils from the College of Liberal Arts and Social Sciences (CLASS), the College of Sciences and Health Professions, the Cleveland-Marshall College of Law, and the School of Nursing.

The second symposium, "Bringing Henrietta to Life: A Dialogue on Disparities across Disciplines" was held on November 15, 2014 and co-sponsored by CLASS, the School of Nursing and the College of Education and Health Sciences. This conference included a greater focus on research and dialogue across disciplines both formal and informal.

As educators, faculty who collaborated on this project recognize The Immortal Life of Henrietta Lacks to be not only an important text, but one that is unique in its ability to introduce readers to such a broad range of topics in medical humanities.

Browse the contents of Bringing Henrietta to Life: The Arts in Medical Humanities: